Do Angels Appears to People Today?

Answer: In the Bible angels appear to people in unpredictable and various ways. From a casual reading of Scripture, a person might get the idea that angelic appearances were somewhat common, but that is not the case. There is an increasing interest in angels today, and there are many reports of angelic appearances. Angels are part of almost every religion and generally seem to have the same role of messenger. In order to determine whether angels appear today, we must first get a biblical view of their ancient appearances. 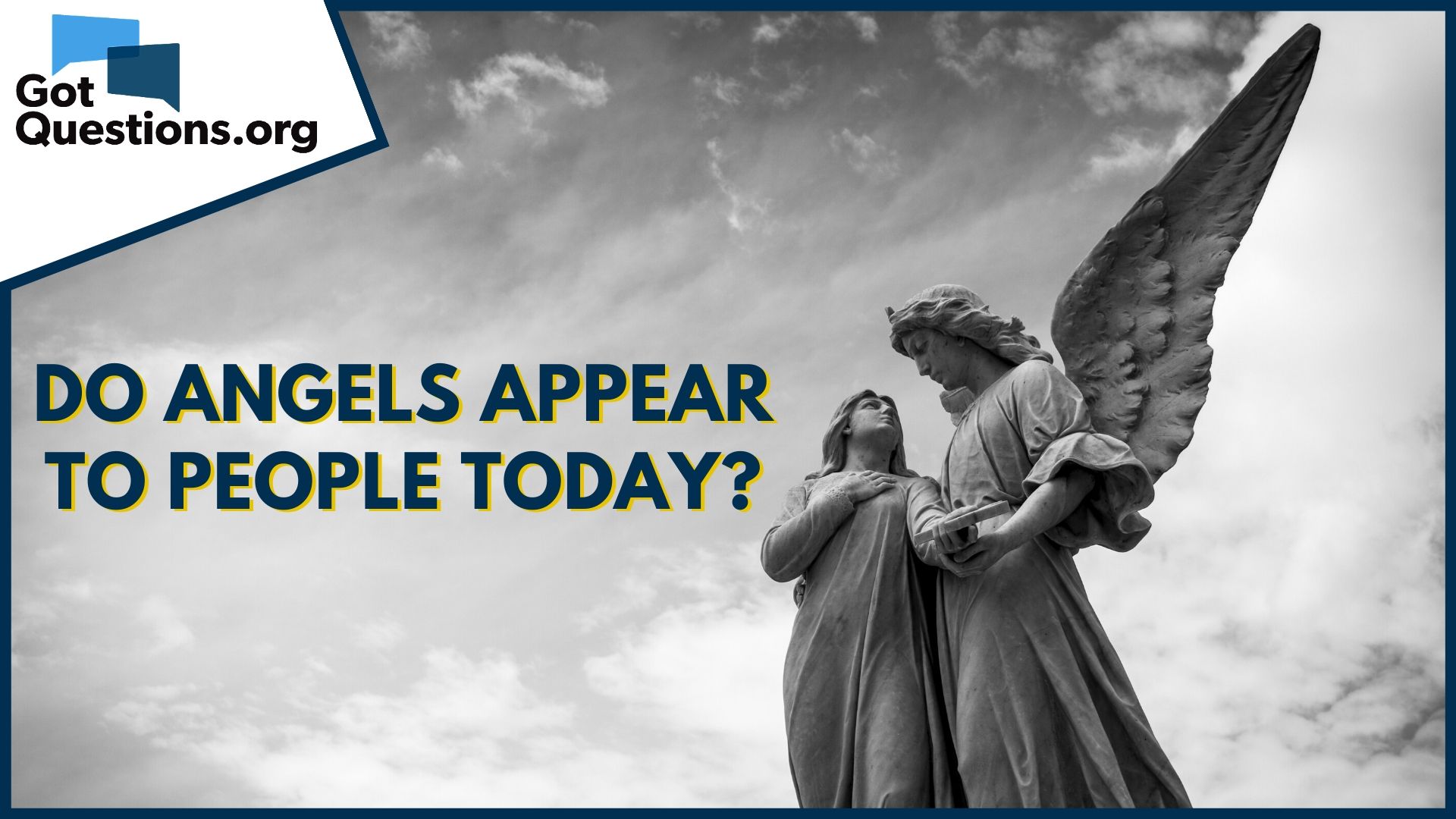 The first appearance of angels in the Bible is in Genesis 3:24, when Adam and Eve were expelled from the Garden of Eden. God placed cherubim to block the entrance with a flaming sword. The next angelic appearance is in Genesis 16:7, about 1,900 years later. Hagar, the Egyptian servant who bore Ishmael to Abraham, was instructed by an angel to return and submit to her mistress, Sarai. Abraham was visited by God and two angels in Genesis 18:2, when God informed him of the impending destruction of Sodom and Gomorrah. The same two angels visited Lot and instructed him to escape the city with his family before it was destroyed (Genesis 19:1-11). The angels in this case also displayed supernatural power by blinding the wicked men who were threatening Lot.

When Jacob saw a multitude of angels (Genesis 32:1), he immediately recognized them as the army of God. In Numbers 22:22, an angel confronted the disobedient prophet Balaam, but Balaam did not see the angel at first, although his donkey did. Mary received a visit from an angel who told her that she would be the mother of the Messiah, and Joseph was warned by an angel to take Mary and Jesus to Egypt to protect them from Herod’s edict (Matthew 2:13). When angels appear, those who see them are often struck with fear (Judges 6:22; 1 Chronicles 21:30; Matthew 28:5). Angels deliver messages from God and do His bidding, sometimes by supernatural means. In every case, the angels point people to God and give the glory to Him. Holy angels refuse to be worshiped (Revelation 22:8-9).

According to modern reports, angelic visitations come in a variety of forms. In some cases, a stranger prevents serious injury or death and then mysteriously disappears. In other cases, a winged or white-clothed being is seen momentarily and is then gone. The person who sees the angel is often left with a feeling of peace and assurance of God’s presence. This type of visitation seems to agree with the biblical pattern as seen in Acts 27:23.

Another type of visitation that is sometimes reported today is the “angel choir” type. In Luke 2:13, the shepherds were visited by a heavenly choir as they were told of the birth of Jesus. Some people have reported similar experiences in places of worship. This experience does not fit the model so well, as it typically serves no purpose other than to provide a feeling of spiritual elation. The angel choir in Luke’s Gospel was heralding some very specific news.

A third type of visitation involves only a physical feeling. Elderly people have often reported feeling as though arms or wings were wrapped around them in times of extreme loneliness. God is certainly the God of all comfort, and Scripture speaks of God covering with His wings (Psalm 91:4). Such reports may well be examples of that covering.

God is still as active in the world as He has always been, and His angels are certainly still at work. Just as angels protected God’s people in the past, we can be assured that they are guarding us today. Hebrews 13:2 says, “Be not forgetful to entertain strangers: for thereby some have entertained angels unawares.” As we obey God’s commands, it is quite possible that we may encounter His angels, even if we do not realize it. In special circumstances, God allowed His people to see His unseen angels, so God’s people would be encouraged and continue in His service (2 Kings 6:16-17).

We must also heed the warnings of Scripture concerning angelic beings: there are fallen angels who work for Satan who will do anything to subvert and destroy us. Galatians 1:8 warns us to beware of any “new” gospel, even if it is delivered by an angel. Colossians 2:18 warns against the worship of angels. Every time in the Bible when men bowed down before angels, those beings firmly refused to be worshiped. Any angel who receives worship, or who does not give glory to the Lord Jesus, is an imposter. Second Corinthians 11:14-15 states that Satan and his angels disguise themselves as angels of light in order to deceive and lead astray anyone who will listen to them.

We are encouraged by the knowledge that God’s angels are at work. In special circumstances, we might even have one of those rare personal visitations. Greater than that knowledge, however, is the knowledge that Jesus Himself has said, “Surely I am with you always, even to the end of the age” (Matthew 28:20). Jesus, who made the angels and receives their worship, has promised us His own presence in our trials.

Filed under Got Questions.org