It was by the grace of God that Steve was brought to a saving faith of the Lord Jesus Christ. It was by God’s longsuffering that he has been sustained in that faith. Steve became a Christian on November 17th, 1961 when as a young marine on liberty he came upon a street meeting held by Open Air Campaigners for Christ in the city of Los Angeles, CA. 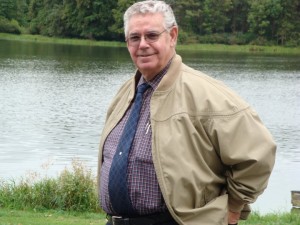 For the remaining three years of his enlistment after coming to faith Steve immersed himself in various books and studies concerning his relationship with Christ. During those three years he worshipped at Granada Heights Friends Church in La Mirada, CA. Sunday mornings and the Church of the Open Door Sunday evenings. Steve was discipled by three families who were members of Granada Heights Friends Church and nurtured his faith. To these three families he will forever by grateful.

Those three years were a tremendous blessing to Steve and it was the foundation gained in those three years that sustained him through several tumultuous years during which he walked away from a faithful walk with the Lord and lived as a prodigal son. But thanks to God, Steve was still a son, and as the prodigal of Luke 15.8-22 was never disowned by the Father. In 1985 after living a life of riotousness that almost destroyed him, Steve surrendered to the authority of God and has since been in service of his Lord and Savior, Jesus, the Christ.

Steve readily acknowledges that is was and is only the grace of God that allowed him to remain alive during those years and by His love that Steve was brought back to fellowship with Him. This grace and love, Steve believes, is best spoken of in Romans 8:28-29.

It is confirmed in this passage that each child of God is being conformed (being changed) to the image of Jesus Christ. First however, God calls that person out of the world into a loving relationship with Himself, making him a son. He justifies that person so that they may have fellowship one with the other and also that justification makes it possible for him to eventually be in the very presence of God.